The german word "Wirkung" describes how cause set in context leads to effect. It not only depends on the mechanism but also it's circumstances.

Unlike the english "Action" it is very specific to this meaning.

"Wirks" is a word introduced by the physicist Hans-Peter Dürr. It points out that "Wirklichkeit" could be described as an interacting set of virtual entities.

The Causal Runtime is my interpretation of this definition in context of the observations of complex systems available to me.

A discrete piece of data stored into memory is called an "Aspect". The thing about aspects is, they are managed by a ref counting borrowing pattern.

A borrowing pattern means, before you can access the memory you have to lock it to a scope. This borrow pattern ensures there are no concurrent mutable accesses to protected memory. However immutable accesses can be concurrent.

This memory protection is realized by a so called "Essence". It manages its atomic lock state.

An "Essence" can be referenced by multiple ref tracking/counting "References".

A "Tick" is a procedure taking in/out parameters triggering consecutive Ticks. An "Act" is a "Tick" set into an execution context.

A "Wirks" is a meaningful set of Ticks and their contextual requirements.

Discrete algorithm's execution order is given by "Branches". Branches are thread safe. 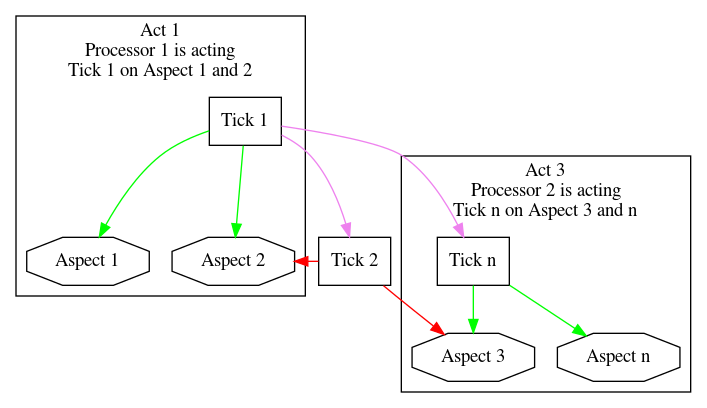 Each "Aspect" can relate to other "Aspect"s through so called "Facet"s. A facet defines how an "Aspect" can interact. While relational information could also be stored at runtime just in the happening "Wirkung" a topology should always rely on properly defined "Facet"s except you have very certain intentions beyond.